RSS Feed
← The Solution to Summer Fun: Sometimes It’s Just One Simple Thing
9 Unexpected Things That Have Happened on Our Road to Debt Free →

The Most Important Tool in Becoming Debt Free

As my husband and I were discussing our finances this evening, our conversation veered, as it often does, into questions about where we’ve been so we can better determine where we are going. We found ourselves on the subject of discussing what, exactly, was the most important thing  in our journey to becoming debt free. He said something that surprised me but that I found rather profound: “It is more of an attitude than a technique.” I looked at him and waited for him to go on as he was sorting laundry from his most recent trip out of town for work. He said, “the thing is, it’s so easy to talk yourself from a want to a need.” I smiled at him. He did not easily jump on board with our debt free journey. For a long time he humored me but didn’t really embrace that where we were going was not only important but achievable. Over time, as he has seen our debt decrease and our choices in life expand he has become even more enthusiastic about getting debt free than I am. My husband, who once coveted a Breitling watch to the tune of several thousand dollars, is now incredibly excited about a re-issue Army watch instead. For less than $100 (but isn’t sure if he really needs it since he has one that tells time fine now, though it is heavily worn and falling apart and has been to the repair shop countless times in the last two years). He even sold several things he loved in order to upgrade his bike recently. It didn’t cost us a dime. He used what we like to call “found money” in the objects he already owned that he was willing to part with in order to have his better bike. He rides joyfully and often and it is a serious hobby for him so I’m proud of him for doing it this way. His attitude has most definitely changed over the course of the last many years that we’ve gone on this journey to debt free. We both backslide on occasion, but I realize tonight how right he is. It’s easy to talk yourself from a want to a need. We still struggle with this, but a whole lot less often than we used to. There are long lists of items that can be cut from a budget but the reality is that the most important tool is this: It’s more of an attitude than a technique. When you embrace the attitude, the techniques will follow more naturally. 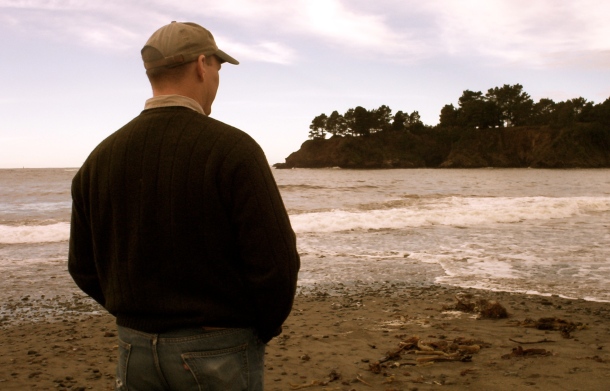 An old favorite picture of mine: Thoughtful by the sea.